Real life keeps getting in the way of the Melbourne International Film Festival this year, which means I've only seen half the films I'd planned to see so far. What I have seen so far has been pretty dark, as the following brief reviews will show: murder, AIDS, incest and bestiality!

The debut feature by young Melbourne director Ben Hackworth is a deliberately eliptical film in which tone and mood are more important than traditional three-act narrative structure. You can read my article about the film here, in MCV, which certainly helped me understand what was unfolding on screen. Many among the audience lacked such insight, which resulted in a large number of walkouts at it's Melbourne premiere on Friday night.

This slow-moving story about a dying gay man who hires a young straight boy to re-enact key scenes from his life in a final bid to come to terms with himself and his sexuality was often striking, but too often felt a little too 70s art film for my tastes. Nonetheless, I'd rather see an ambitious failure than a bland success any day.

The second feature film from director Tom Kalin (Swoon) in 15 years, Savage Grace is the true story of Barbara Baekland, a society dame who was murdered by her own son, Tony, in 1972. It seems that Tony eventually snapped after his mother's repeated attempts to cure his homosexuality by fucking him drove him over the edge.

This beautifully presented story of murder, class and incest is not for everyone, but I found its superb central performance by Julianne Moore as Barbara; its gorgeous texture and composition; and uncomfortably riveting plot quite fascinating.

On Saturday I was lucky enough to present a conversation with Tom Kalin at the festival, which despite a relatively small audience went over extremely well. Look for a full transcript of our hour-long some in the coming weeks on Senses of Cinema (I hope!).

Set in the first years of the AIDS pandemic, at a time when the HIV virus was just being discovered, this vibrantly-shot film about the impact of the disease on a tight-knit group of friends was less engaging than I had hoped. Indeed at one stage, about a third of the way into the film, I was seriously considering walking out. By its final third it had re-engaged my interest, to the point of tears, but nonetheless I can't really recommend it with much enthusiasm.

Performances are good but never great, while the story itself tells us nothing new as AIDS dramas go, failing to ever really dig deep into the psyches of the characters concerned or give us a fresh perspective on those first, terrifying years of the crisis, when gay men were dropping like flies. 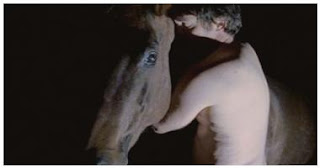 My high hopes for this documentary about a famous case of bestiality (or zoophilia, as the film's subjects would no doubt prefer to be described) faded before it even began, thanks to a projection fault at the Greater Union Cinema which saw the film's starting time delayed by almost 20 minutes. When it eventually began, it was slightly out of focus, and remained that way for the rest of the screening.

Exploring the 2005 case of a man who bled to death after being fucked by a horse, which led to a clandestine network of zoophiles - or zoos, as they call themselves - being uncovered, director Devor has chosen to make a poetic, dreamlike film, instead of a more traditionally structured documentary. The result, while pleasant enough, fails to get inside the heads of its interviewees, and so consequently never really engages with its subject matter to any real degree. A pretty to watch but ultimately unsatisfying documentary.

I saw The Witnesses (at the Regent? Or were you at another session?) The final act started to drag for me, actually and you're right about the performances. Fine, but nothing amazing. I gave it a B-.